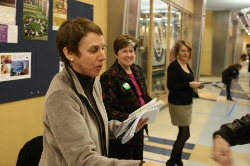 From the Arlington County Democratic Committee:

The Arlington County Democratic Committee is pleased to announce that Libby Garvey will be the Democratic nominee in the special election for County Board being held on March 27, 2012. Ms. Garvey was the winner of the Arlington Democratic Party’s County Board Caucus, held over two days on January 19 and 21. Out of 4,314 ballots counted, Ms. Garvey secured 1,915 votes.

The final vote counts were as follows:

“This County Board contest was one of the hardest fought in recent memory, featuring five great candidates from various constituencies in Arlington,” said Arlington Democratic Chair Mike Lieberman. “We are proud that Libby Garvey emerged from this caucus as our nominee. She has been an outstanding School Board Member, and we know she will make an excellent County Board Member as well. We look forward to committing our full party resources behind getting Libby elected on March 27.”